PHILADELPHIA- Sen. Al Franken lent his star power to the Senior Council meeting Thursday at the Pennsylvania Convention Center. He and other speakers voiced their support for Hillary Clinton for president.

The issues discussed included protecting the gains that had been made in the fields of Social Security and Medicaid, advocating for the baby boomer generation in Congress, and leaving a prosperous future to their offspring.

The Senior Council meeting was attended by members of the American Federation of Teachers and the Sheet Metal Workers International Association. 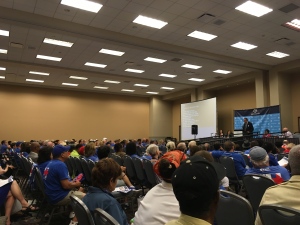 The common refrain heard throughout the meeting was that members could rest after  Election Day, but that for the remainder of the campaign, it was time to work. Strategies of going door-to-door and collecting signatures, as well as engaging other voters were floated for voter engagement.

While there was a defined platform for the senior council, several members had issues that they felt were important.

Jimmy Gaunce, 84, from Lexington, Kentucky looked at Social Security as a key issue to tackle.

“I think it’s very important that we protect Social Security, that we improve Medicare, and most certainly the Affordable Care Act.”

Charles Jackson, 69, of New York City had an entirely different pet cause as a senior voter.

“The most important thing I feel is that we all get out vote. Try to get the other people who want to sit out to really get involved, because it’s very important that we try and get Hillary elected, because the opposition doesn’t really seem to care about the welfare of our seniors.”

“Protecting defined benefits for everybody, including the people that today don’t have pensions,” he said.

Mandes also had strong words for how important he felt it was to ensure benefits for the future.

“Every worker, whether they’re in private industry or the public sector must have a defined pension. If you don’t the country’s going to be in trouble very shortly.” 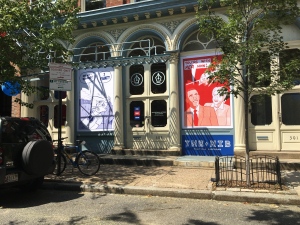 cartoons off the printed page and puts them in a public gallery space.

“The Nib Takes Philly,” which is sponsored by the cartoon website called The Nib, features political cartoons and election-themed objects, and props at a location on Cherry Street in Old City. 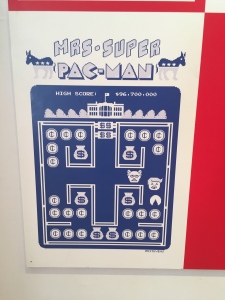 No one is spared. Donald Trump, Hillary Clinton, Barack Obama and many other politicians are lampooned.

Cartoonist Matt Bors, 32, from Canton O.H., explained how the exhibit started with a simple idea.

“We had a new website launch last week, and we were talking about sending cartoonists to do live drawings,” said Bors. “Then it was maybe we can do a gallery show. It just sort of grew and grew into something quite big.”

Dan Perkins, 55, a cartoonist at the exhibit from Iowa City, I.A., 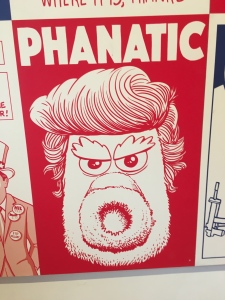 who goes by the pen name Tom Tomorrow, said the exhibit is more than just comic relief.

“Cartoonists have been through a decade basically of newspapers going out of business, cutting budgets, and of websites not wanting to pay for cartoons,” he said. “The art form is kind of teetering on extinction.”

“So the fact that you have someone like Matt, with his energy and his ability to find someone to sponsor this and to pull this thing together,” Perkins continued. “I can’t even explain how important this is to cartooning.”

PHILADELPHIA-The Democratic National Convention got underway this afternoon, but not without some drama. Supporters of Senator Bernie Sanders of Vermont, who had protested yesterday, made their way into the Wells Fargo Center, and into the seats of the lower level.

And they made their voices heard. During the early afternoon portion of the convention, chants of “Bernie” and “This is What Democracy Looks Like” echoed through the arena. There were also boos early in the proceedings, although they later quieted down.

Some of the people in the arena were also protesting the Trans Pacific Partnership, holding up signs opposing the legislation and chanting “no TPP” at several points during speeches.

In anticipation of resistance from Sanders supporters reluctant to vote for Clinton in the presidential election, many of the speakers this afternoon made it a point to call for public unity. The main message was that while Sanders and Clinton may have had their ideological differences in the primary, Trump was a far greater threat.

Gary Mannion, 27, and Jim Blatchford, 29, both of Lawrence, Mass. were eager to hear the speech of Senator Elizabeth Warren.

“We’re just looking forward to hearing her talk,” said Blatchford, “and hearing what she has to say about how we can come together now as a party.”

Mannion said although he and Blatchford voted for Sanders in the primary, party unity was extremely important to them.

“It’s absolutely essential that it happens, and it starts tonight” said Dodd. “With what’s been going on, [which] has been a little over the top from day one, and unfortunately there are times when you see things that are happening that you didn’t prepare for.”

He was however, hopeful that the calls for unity would not fall on deaf ears.

“I think tonight’s gonna set the stage for the rest of the week and we’re going to come out of here a united front and with a great convention.”

PHILADELPHIA – Thousands of protestors gathered for two main demonstrations the day before the start of the Democratic National Convention: the March for a Clean Energy Revolution and the March for Bernie.

Click on the thumbnails below to view full slide show.

Parisa Vahdatinia, 31, holds a sign calling for Hillary to be indicted. 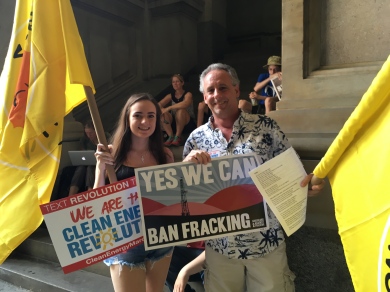 Steve Terlaga, 54, and his daughter Ariana, 16, participate in protests outside of City Hall.

Demonstrators marching through the corridor of City Hall.

Lana Mustafa, 28, and her dog Buzz were out protesting today. 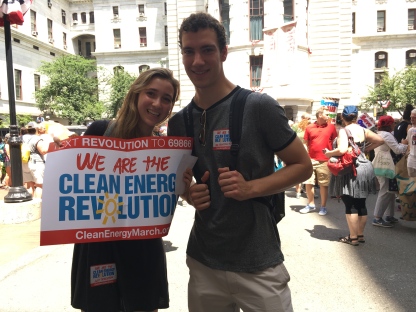 Amanda Phillips, 19, and Yannick Van Noy, 20, before the start of the protest. 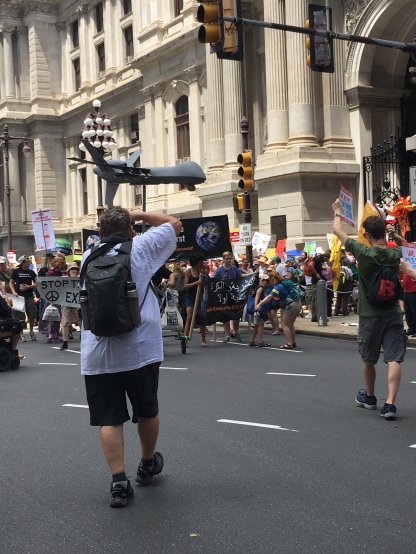 A drone prop is wheeled out onto the street. 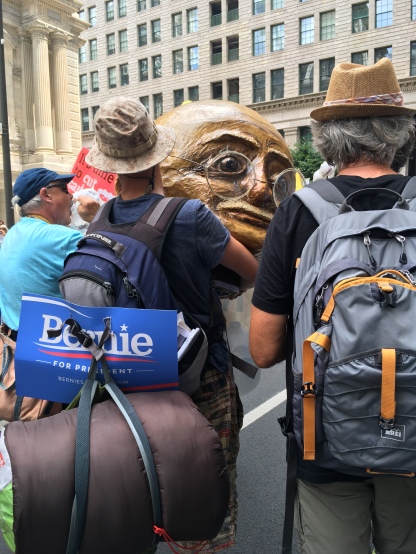 A protester holds the prop head of Mahatma Ghandi while waiting for the march to begin. 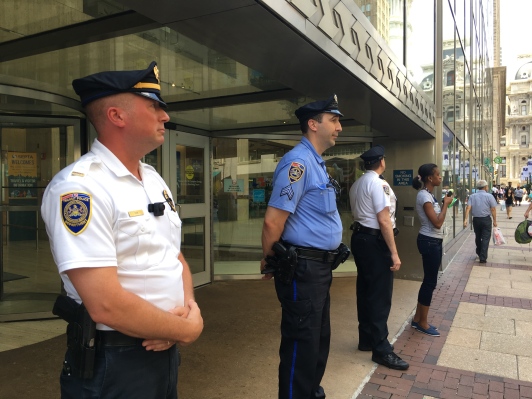 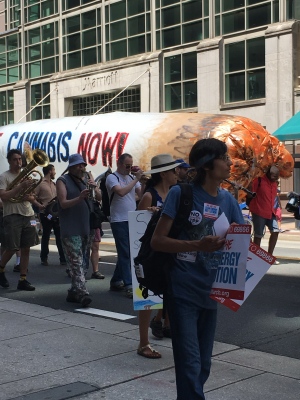 A large inflatable blunt is marched down market Street to protest for the legalization of marijuana. 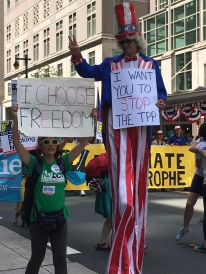 Protesters against the Trans-Pacific Partnership march with a banner down Market Street. 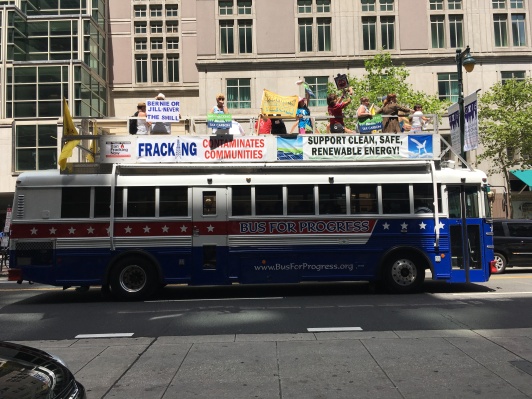 A bus full of protestors makes its way down Market Street.

Looking to capitalize on the protestors, a political condom salesman sets up shop.

The week before the Democratic National Convention in Philadelphia, RowanU DNC News staff interviewed members of the New Jersey delegation to hear their views on the convention, the upcoming election, and local issues facing New Jersey residents.

Q: Did you support Bernie or Hillary during the primary? How do you feel about the result?

A: I supported Secretary Clinton, and I am pleased with the results of the primary.

Q: Does the DNC convention matter to the people of New Jersey?

A: I think the convention matters because it is a part of the very important process of picking our next president.

Q: What is the biggest issue facing New Jersey residents this election year? What concern do you hear most often from voters or residents?

A: I think right now the safety of our country has taken a greater role in the minds of voters.

Q: If you had a few minutes of face time with Hillary Clinton, what would you want to tell her?

A: I would tell her that she should utilize the lessons she learned from the primary, with regards to the issues that Senator Sanders raised, to continue to shape her thinking on the policies she would bring to the White House.

Q: If a delegate from another state asks what they should visit in Philadelphia or New Jersey, what is one location you would suggest?

A: They should visit historic Burlington County to witness some of the great history of our country.